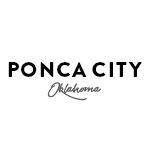 The citizens of Ponca City voted to approve $30,000 in bonds for the construction of a municipal light and power plant to meet the community's demand for electric service in 1912. That same year, the Ponca City Courier stated, "Ponca City will soon have a 'White Way' the same as Kansas City, Mo." Soon after, 32 ornamental iron posts were distributed along the sidewalks of Grand Avenue from the Santa Fe railroad tracks to Fourth Street, and construction began just north of the Calkins Store on Cleveland Avenue for a new electric light plant. The 66 by 36-foot building had an 18-foot ceiling and contained two small steam boilers and engines. The City of Ponca City began serving the citizens of Ponca City in 1914. As the City grew and business increased, the voters approved more bonds to add new equipment and enlarge the building. The first Nordberg diesel engine was purchased in 1923.

The City sold its remaining steam equipment and built a modern all-diesel engine power plant on North Union in 1927. This was paid for with the voters’ approval to issue $300,000 in bonds. The building is 130" 8' long, 85" wide, 59" high, and contains a full 12" basement. This fireproof building was made of concrete, pressed brick, and steel. Foundations for the engines were isolated from the building to eliminate the transmission of vibration when the engines operated. To muffle the noise caused by air intakes, large air suction chambers were constructed within the engine foundations, and the air filters were located outside of the building. Also located outside of the building were the fuel storage tanks that supplied the engines with diesel fuel. Gas-fired boilers were used for heating the fuel oil, and gas-fired radiators were used to heat the building. The switchboard was centrally located on the south side of the engine room, near the generators.

This plant contained the largest group of Nordberg diesel engines in the world. Nordberg ended diesel engine production in the mid-1960s. The building housed ten generating engines, of which the second and third engines from the Cleveland Avenue Plant, as well as the fifth engine, no longer operate.

In September of 1995, the 11th engine was donated to "Friend Ships" by the Ponca City Board of Commissioners and is being used to help power one of their ships. "Friend Ships" is a nonprofit corporation that operates a fleet of vessels staffed entirely with full-time, 100% unpaid volunteers. Surplus commodities, volunteers, and ships are used as tools to make the program able to collect, transport, and disperse humanitarian aid on a massive scale and to provide life support services to nations in a cost-effective manner.

Construction of the masonry and aluminum steam generator plant started in September of 1964. On July 1, 1966, the plant started commercial operation with the installation of the first of two General Electric steam generators. Unit Number One was capable of producing 16,500 kW, and the capacity of generation for both the Steam and Diesel Generation Plants, with all 11 diesel engines operating, was increased to approximately 45,000 kW. To expand the capacity of the plant, a second larger General Electric unit was installed in 1975. The addition of this unit increased the production capacity another 40,000 kW. In combination with the Diesel Generation Plant's 20,000 kW, the total production capacity of both facilities was approximately 75,000 kW.

The Steam Generation Plant building is 111" wide, 859" long and contains two boilers, a control room, a water treatment facility, administrative offices, and auxiliary equipment. The plant is equipped with automatic controls to shut the plant down if there is a malfunction.